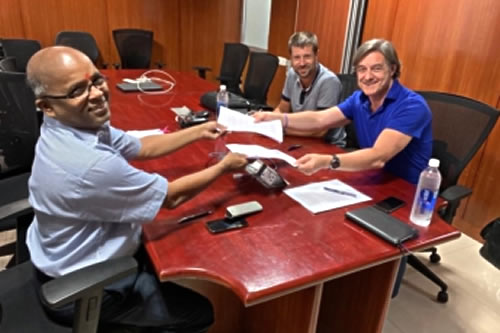 Fuitecnik has taken a key step in its internationalization process. Within its strategic plan, the Spanish company (from Navarra) of hydraulic and cooling components for wind turbines has signed a collaboration agreement with Wheels India Limited, the largest Indian manufacturer of automotive components, which will allow both companies to grow in the Asian country, create synergies in the wind sector, promote engineering projects and develop alliances with local suppliers. From now on, Wheels India Limited, whose turnover is 7,000 million dollars, will manage the facility that the Fluitecnik owns in the Asian country. Thanks to these synergies, the company led by Joseba Pérez expects to grow in the market of components for the wind sector.

Fluitecnik‘s General Director, Joseba Pérez, and Commercial Director, Kepa Indaberea, came to the signing of the agreement. And as representatives of Wheels India Limited, their Senior Vice President, S. Suresh, and Senior Manager, Arun Prasad Rangaraja attended. “This agreement responds to the 2018-2020 strategy defined in Fluitecnik and focused on the wind business, in which a fundamental part for the growth of such a business goes through a stable presence in India and by the hand of a company of the size and prestige it has Wheels in India”, explains Joseba Pérez.

Fluitecnik has two business areas: Industrial and Wind. In the WindEnergy area, Fluitecnik designs and manufactures tailor-made solutions for wind turbines with powers between 0.5 MW and 7 MW.. Thanks to this agreement, the Fluitecnik strongly believes that it will be able to meet “the expectations of its current clients in the wind sector and accompany them in the expected growth in India”, as well as expand its client portfolio.

Fluitecnik landed in India in 2016. Since then, the company has a production facility, designed to produce coolers. However, the difficulty of managing it at a distance made the company’s managers look for a more effective solution. The plant, which has eight employees and an area of 342 square meters, will now be managed by Wheels India Limited, which was established in the country in 1911, has a turnover of 7,000 million dollars and belongs to the TVS Group. “I understand that they will be more effective than us from here. And the achievement of the competitiveness of the processes, as well as the results, will be the responsibility of both ”, says Joseba Pérez.

Thus, Fluitecnik expects to increase its presence in the wind market, establish cooperative relationships in the engineering projects of both companies and develop the panel of suppliers, which will bring more competitiveness to both the products and services developed in India and to those that they already have in Europe.

Likewise, the planned investment will be shared between both companies, as well as the participation in the results: “My objective is to have a presence there without large investments, so that a company of this prestige is responsible for making the production processes competitive and for the orders, jointly manage the market…”

India is a target country for Fluitecnik’s customers in the wind sector. Hence the importance of establishing itself in the Asian country, “with a growth potential of more than two digits in the next three-five years.“

See article in NavarraCapital.es (In spanish)